Both require a group of friends, both promise hours of fun, and both are brilliant opportunities to catch up with the important people in your life over a couple of organic lagers.

Combining them together can lead to a riotous afternoon that soon becomes a fun filled evening. Before you know it you’ll hear shouts of “you sunk my battleship” roar over your kitchen table full of cards, dice, organic lagers and assorted snacks.

There’s nothing better than winning a game of Risk over a few craft Pilsners, or slamming down your winning Monopoly token in victory (we always go for the dog) and watching everyone’s craft beers fly into the air.

Sure, you could crack out the video games, but the togetherness and joy you all get from being huddled around a table, craft beer in hand, breath held, waiting on the roll of a dice can’t be matched by some pixels on a screen.

Plus, it’s easier to drink a Freedom organic lager when you’re not holding a Playstation controller.

So, as the days get shorter and the temperature cooler (that’s an understatement, it’s October and freezing already) board games are the perfect excuse to have friends round. Especially if you don’t want the hassle of cooking a meal. You can pull a game off the shelf, open a few bags of crisps and get a crate of Freedom beer in the fridge.

We think board games are a great way to spend an autumn evening with friends, we’re all avid boardgamers at Freedom and we’ve put together our top 5 list of the best board games to play with friends*.

*This list has also been selected based on how easy it is to drink a bottle of Freedom beer when you’re playing a game.

A few craft lagers, a couple of friends, let the good times roll! 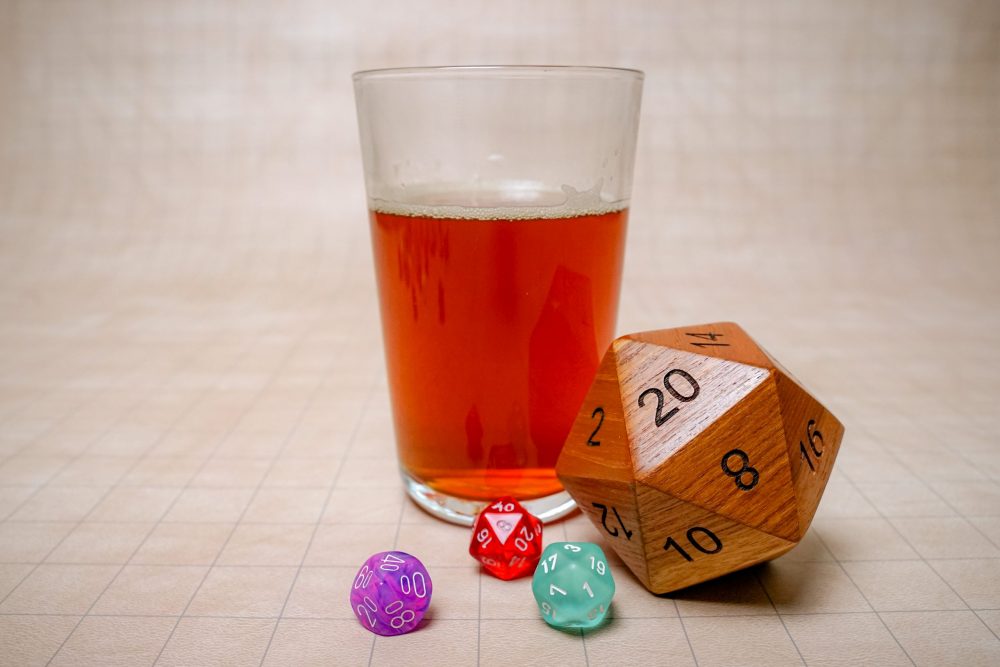 There are 1000’s of board games on the highstreet. That’s not to mention the multitude of smaller, independent indie board game makers who are constantly working away on the next niche tabletop hit.

You might be wondering how we’ve managed to narrow all those options into just 5 games. Well we had a few criteria that we’ll share with you:

1. We didn’t want to pick the classics

How many ‘best of’ board games lists do you see that have the big 3 in them? What’s the big 3 you ask? Monopoly, Cluedo and Scrabble. Yawn.

Yes they might be iconic but we don’t think they represent the best board gaming has to offer. With so many games out there now we think it’s best to spice up the selection. You can always bring out Monopoly at Christmas.

2. The games have to be quick to learn but hard to master

If it takes twice as long to read the rule book as it does to play the game then that board game is a no no for this list. We want to play games that you can pick up, play, and basically learn on the job.

3. The games need to be over in one sitting

As much as we think the worlds of Dungeon & Dragon (D&D) and Warhammer are great, playing these games can take weeks. Some D&D games never end. So, while these games are great for seasoned players who meet up to play every week for a casual Wednesday night they can be a bit daunting.

If you are a regular gamer and want to make sure you’re always stocked up with organic beers when your friends arrive make sure you check out our subscription service. There’s nothing worse than running out of craft lager in the middle of a quest.

4. The games have got to go well with a Freedom organic beer!

Some board games can be a pretty serious affair. They can take a lot of concentration and need their players to be on the ball 100% of the time. These aren’t the types of board games for this list. We’ve picked games that encourage conversation, let you have fun with each other and generally bring the party. 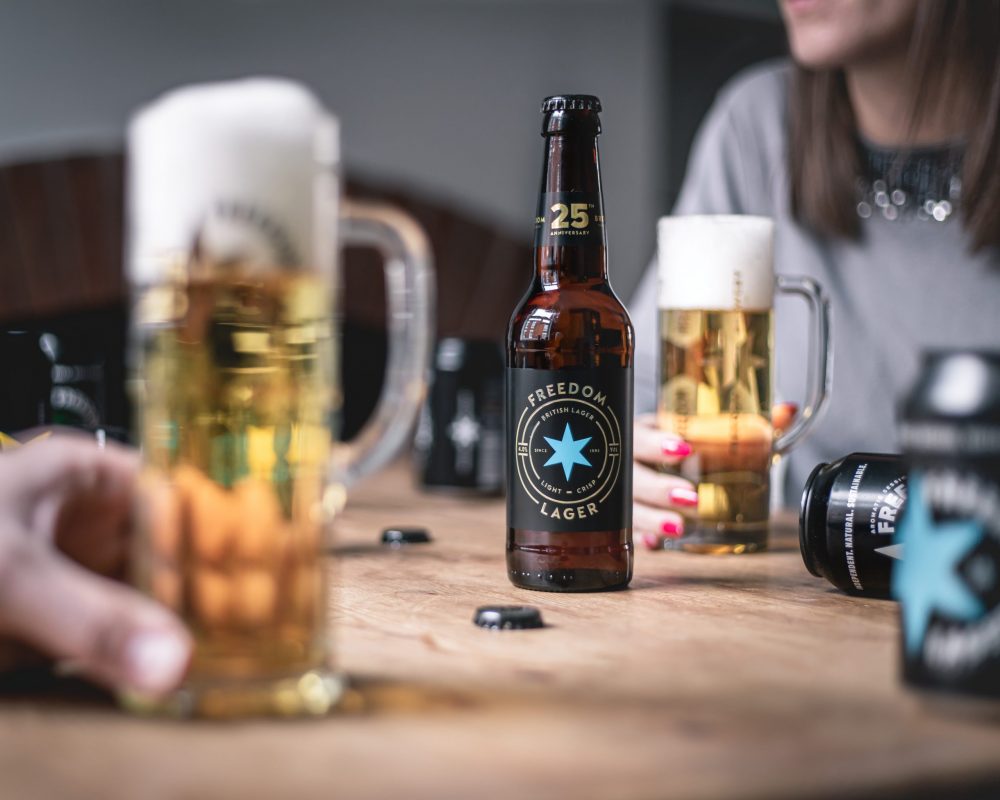 Below is our list of the best board games to play with your friends this autumn. Grab a few organic Freedom beers, snacks and dive in.

This easy to learn hard to master game is great for those new to boardgames. It takes place on the fictional island of Catan and each player has the same goal. Build a settlement and gain victory points. The main mechanic of the game is trading resources, so it encourages conversation amongst players.

Also, nobody gets knocked out, everyone plays until the end. This means that losing players aren’t left twiddling their thumbs and sipping their organic lagers in the corner as the last two competitors duke it out for the number 1 spot.

Catan is a great party game that can be set up and played quickly. Plus, nothing helps those tricky trade negotiations get moving like a few Freedom craft Helles.

From an imaginary island to a medieval French town, the game Carcassonne is named after the real place in the South of France. The game involves flipping over tiles that display a medieval landscape (roads, fields and cities). As players flip the tiles they can join them together and lay claim to them. Once all the tiles are flipped the players tally up who has the most and they’re the winner.

Like Catan, the game is easy to learn and hard to master. It’s quick to play too so you can get several rounds in before the organic pilsners run dry.

Ok, I know we said no ‘classic’ board games but we’ll make an exception for Risk because it brings the diplomats out of all of us. No other game will have you scheming and dealing with your fellow players like Risk. As the craft beers flow and tensions run high you’ll find yourself verbally grappling with friends over the board as you plan your next move.

It is the longest game on this list in terms of play time but the amount of fun and discussion you can get out of moving some fake soldier around a map is undeniably amazing.

What do you get if you take the board away from Scrabble? You get Bannanagrams! The game is very similar. There’s a collection of face down letter tiles in the middle of the table and players need to scrabble (see what we did there) to make the most words they can before the pool of letters runs out.

Things can get pretty serious in the middle of a game but the winner has to shout out “BANNANAGRAMS” once they’ve placed all their letters. This leads to a mad flurry of conversation and comparison as people check what words each other has come up with. Just make sure they’re spelled correctly. You don’t want to be a rotten banana.

This one isn’t everyone’s cup of tea but if you like your humour a bit edgy then there’s no better game for enjoying a few relaxed craft beers with friends. You’ll be taking swigs of organic Pilsner to avoid laughing as you think “they didn’t just put those cards down”.

This game is super easy to play and honestly, it’s not really about winning, just having a fun time. There are also family friendly versions of the game if you’d like to play it without the controversy.

Don’t forget the drinks and snack next board game night

As the days get shorter we can’t wait to invite some friends round for some cosy evenings inside, playing board games and drinking craft beer. If your next board game evening is on the horizon don’t forget to stock up on Freedom beers over at our online shop. If you’re making board game night a regular occurrence subscripting to our beer subscription can guarantee you’ll have beers in the fridge whenever you need them. 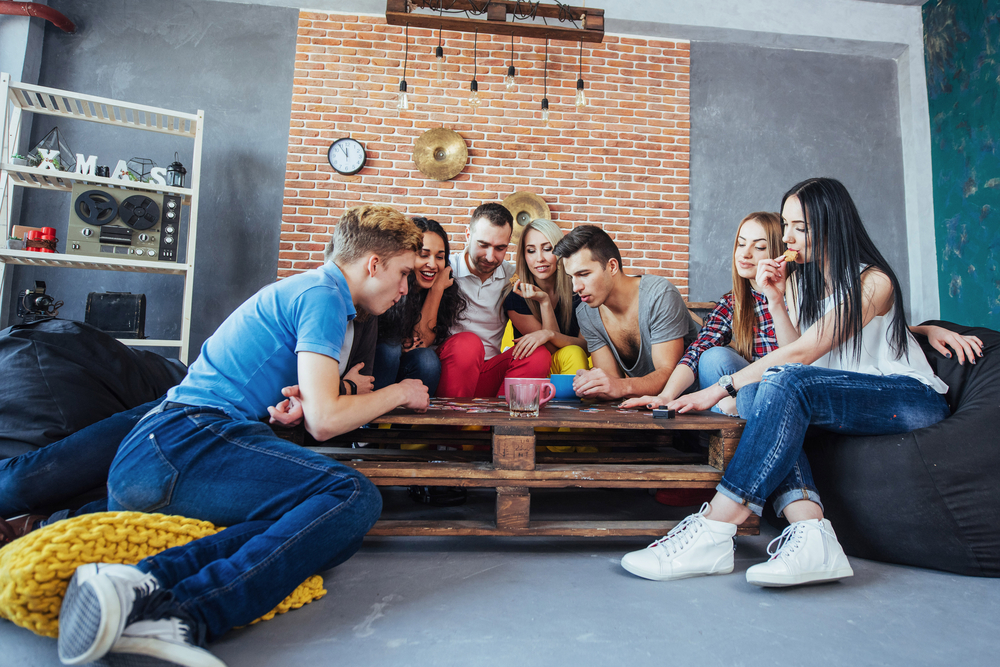